Cookie was one of our superstar rabbits in our rabbit incursion program and he was Jacqui’s beloved pet. He unfortunately passed away on 22th August, 2020. Below is Cookie’s story, a tribute to him. 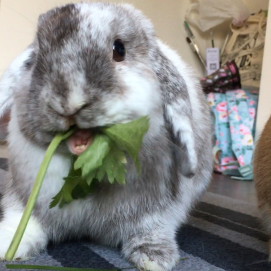 I still remember the first time I met Cookie. I found his adoption ad on the internet. After a few days it was taken down. I assumed it was because he was adopted, nevertheless we went to visit the rabbit rescue (Freedom for Farmed Rabbits) to find Bella (our other bunny) a friend.

Hayley, the rescue owner, was there and was showing us the rabbits available for adoption. As I was looking at the different rabbits, I turned around and saw a rabbit that looked like Cookie. I asked Hayley ‘Is that Cookie?’ She said yes and that many people applied to adopt him on the internet so that’s why they removed the ad. I was overjoyed. I simply could not believe that Cookie was there!

Hayley told me that Cookie was rescued from the pound. He was a stray rabbit and as no owner came forward, he was going to be euthanised the next day. Hayley saw him happily bouncing around not knowing his fate. Despite the rescue is in full capacity, they decided to take him in, escaping death.

Cookie was bonded with Bella after a few days staying at the rescue. We then took them home. They were the best of friends. They have fights once in a while, but most of the time, they were inseparable.

Cookie was cute, comical and sweet. He would come up and nudge me with his cute nose to pet him. He was also a big eater. He would eat anything that we gave him. He was also a chilled bunny, flopping on his sides with his legs stretched out, tilting his head back, enjoy the moment. Cookie was very strong too. He could lift up the playpen gate and let himself out. Cookie was spontaneous. If he noticed something interesting or if he heard the opening sound of treats, he quickly tried to find the source. Cookie loved kisses and would give me a kiss when I bent down with my head close to his face.

Cookie was a lucky bun as Bella always groomed him. If Bella left the playpen, he would wake up from his sleep and quickly followed her around. They loved to hang out in our bedroom, sitting next to our door or under our dressing table.

Cookie stopped eating earlier this week and we brought him to the vets. He was on fluids but his intestines were still not in good shape. The vet called in the afternoon and said we could wait it out or give him a surgery to release the gas build-up and obstruction. We decided to go ahead with surgery as it sounds promising rather than risking his life overnight. From the surgery, the vets said that Cookie had chronic adhesion, which means that his intestines are sticky like overcooked pasta, while for normal rabbits, it should be like nicely cooked pasta. The vet said to just make sure he’s eating enough vegetables every day to keep his intestines hydrated and smooth.

Cookie seemed to be recovering well and we took him home not long after. He was eating, less than normal, but he was passing stools. Until later in the week, he did not touch his hay, he was still hopping around with energy and at night he ate all the vegetables we offered to him. I gave him critical care to top up his food intake. But the next day, he was hunched up again and was in pain. We brought him back to the hospital in the morning.

Cookie was on fluids and pain relief. He has not improved in the afternoon. At night, the vet said we had three options. One was to do another surgery but prognosis is not looking good as he just had a surgery few days ago. Second was to put him to sleep. Third was to continue to give him strong pain relief but Cookie had been there for 9 hours and had passed the 6-8 hour of window of the chance of getting better. It was such a difficult decision for us. And we decided to end his suffering. It had been such a very difficult week for Cookie.

We drove to the hospital to see him for the last time. He was lethargic and in so much pain, lying in a pet bed. His mouth was slightly opened, struggling to breathe. We cuddled him, talked to him, petted him, gave him lots of kisses and comforted him.

Because of COVID-19 restriction, only one person could be with him during the process of euthanasia. Victor let me to be with him. The vet came in and told me it would only take 20-30 seconds for him to go to sleep once the drug goes in. He would only feel a bit cold and then he would go to sleep. I held him, kept on petting his head as that was his favourite thing. I kept talking to him, telling him that I loved him, that he was very brave, that he was such a good friend to Bella, that he wouldn’t be in pain soon. I kept on stroking his head and body, and then I watched him from breathing to not breathing. The vet checked his heart to confirm that his heart had stopped beating.

My heart broke into a million pieces. I am so glad that I could be with him until the very end. But Cookie is my baby, nothing is more heart-breaking than watching him passing away before my eyes. Cookie had only been with us for two years. He had brought so much joy in our lives. He had gone too soon.

We are so very blessed to have Cookie in our lives. And we are so grateful that we could say our goodbyes to him and send him off to a better place.

Cookie, I love you and I miss you. I will remember all the good times that we had together. You are forever in my heart. May you binky free over the rainbow bridge.